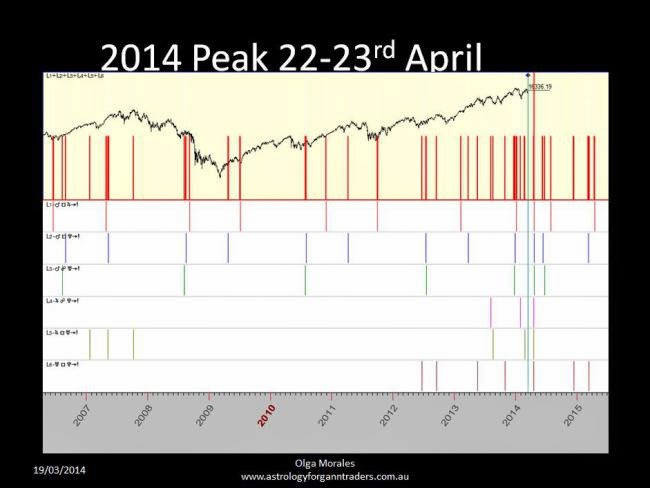 Traders, watch the skies. The stars say that the Nasdaq Composite Index's worst decline since 2011 this week may be just the start of a stock-market rout.
In the third week of this month, Pluto, Uranus, Jupiter and Mars will fall into an arrangement astrologers call a Grand Cardinal Cross, which is when four of the planets oppose one another in the shape of a cross. According to Olga Morales, who runs Astrology for Gann Traders from Melbourne, Australia: "This tension creates tremendous instability on our earth."
Traders don't seem like the types to check their horoscopes before deciding whether to dump stocks, so before scoffing, hear this. In the early 1990s, I was invited to the treasury department of the newly established European Bank for Reconstruction and Development. Halfway through my visit, a computer pinged in a corner of the room, and a trader leapt into action, buying this and selling that. A software program that combined technical analysis with astrology had identified a market opportunity.
I saw my first broker note yesterday pointing to the forthcoming planetary commotion, albeit with a healthy dose of skepticism. Astrology advocates, moreover, claim that the Fibonnaci series technical analysts rely on for buy or sell signals derive from what used to be called the movement of the spheres. The web is littered with sites offering books, training courses and newsletters that can help you use the planets to make money in financial markets, suggesting that somebody out there is trading on star movements.
Here's the twist about the imminent Grand Cardinal Cross. The last time this constellation visited the heavens seems to have been in 1932. Morales has been sending charts to her subscribers highlighting the market moves from that year: The Dow Jones Industrial Average slumped 20 percent. So to some, the 2.45 percent decline seen so far this year is looking prescient.
"This clearly is good reason to consider getting a jump on the 'sell in May' crowd," says Henry Weingarten, who has run The Astrologers Fund Inc. since 1988. "If you believe the risk/reward of today's stock market is increasingly less favorable to bulls, and you dislike elevated risk, then either hedging, writing calls, or adding portfolio protection is cosmically prudent."
There's something else to watch in the heavens above and worry about in the trading rooms below: blood moons. This month features a total lunar eclipse of the full moon on April 15, and a solar eclipse of the new moon on April 29. Because of the way light bends around the earth before it reaches the moon, the moon can appear reddish in hue, hence the bit about blood, says Malcolm Bucholtz, author of the Astrological Trading blog.
Not all of the cosmic crowd are bearish. Ted Hammack of Sinewave Astrology notes that the coming arrangement doesn't include Saturn, which he calls "the big mover and shaker in mundane events." Saturn, it seems is "stationary this July at 16 degrees Scorpio" -- which means nothing to me, but to Hammack it says Saturn isn't making trouble and we're safe(ish).
"Hence I don't think the current Grand Cross will show up primarily in the global financial markets unless the geopolitical trends -- Russia in Ukraine, global earthquakes etc. -- get out of hand," Hammack says.
I will leave the final word, though, to Bucholtz of Astrological Trading: "You will know the height of stupidity has been reached when you hear Bloomberg and CNBC talking about blood red moons."
Article By Mark Gilbert 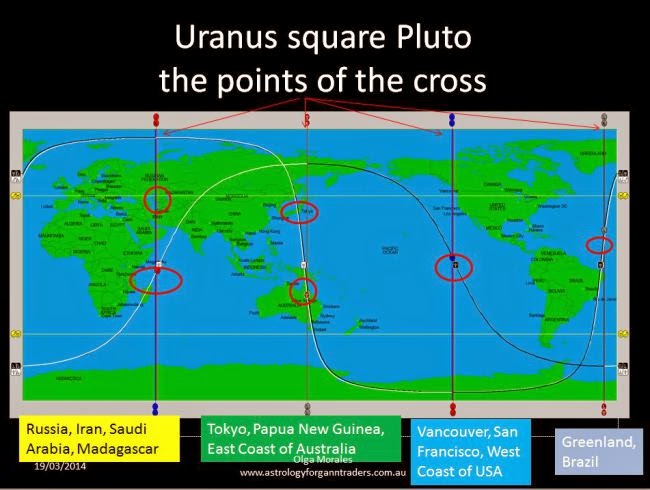