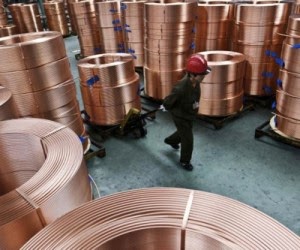 In late afternoon New York trade on Tuesday May copper changed hands at $2.995 a pound as weakening demand from China and a flood of new supply worry the market.
Earlier in the day the red metal fell as low as $2.965, down more than 2% from Monday's close.
Tuesday's decline marks something of a reversal in sentiment after weeks of steady gains as the copper price dug itself out of a near four-year low struck mid-March.
Copper is down nearly 12% from opening levels for the year as the market adjusts to slower growth in China which consumes more than 40% of the world's copper.
China's copper imports have not slowed down, rising a whopping 31% to 420,000 tonnes in March over last last year and bringing the first quarter total to a record-breaking 1.3 million tonnes.
Those deals are now being unwound supplying even more copper to the market.But those numbers may be misleading and do not reflect a sharp fall-off in end demand. That's because much of that copper has been tied up in finance deals as collateral for trade credit and is not being put to industrial use.
On top of that as activity in China slows it drags down the copper price thanks to the widespread use of the metal in construction, transport and manufacturing.China's copper imports are highly price sensitive and traders could have simply made the most of the fall to $2.92 a pound a month ago to stock up.
The copper market has also been disappointed at the lack of major policy stimulus in China.
A number of small steps taken by Beijing including bringing forward already announced infrastructure projects has encouraged hopes in the market of bolder action.
But last week Premier Li Keqiang poured cold water on the notion saying: "China will not resort to short-term stimulus policies just because of temporary economic fluctuations … we will pay more attention to sound development in the medium and long run."
The supply side is also driving down price expectations.
The closely-watched Thomson Reuters GFMS Copper Survey forecasts a period of copper market surpluses and predicts the average price to test $2.75 a pound ($6,000/tonne) in the second half.
Global mine production rose by 8% to 17.8 million tonnes last year, its fastest pace in over a decade thanks to marked expansion top producer Chile and the Democratic Republic of Congo.
Output is to top 22.2 million tonnes this year from just over 21 million tonnes in 2013 led by Codelco's new 160,000 tonnes-plus Ministro Hales mine, Glencore's Las Bambas project in Peru it sold to China's Minmetals this week, the first full year of production at Rio Tinto's Oyu Tolgoi mine in Mongolia and expansion at BHP Billiton's already giant Escondida mine.
Posted by Unknown at 12:57 PM