The how and when of Chinese stimulus 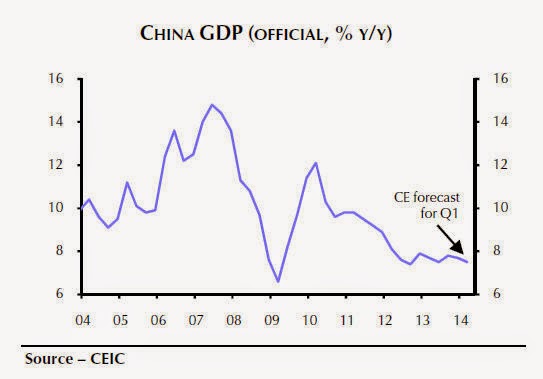 The world's second largest economy is slowing down and dragging all resource-based economies down with it.
China's leaders want to move the country from an investment-led economy to one based on consumption.
But the rebalancing is proving difficult and signs of a slowdown are not hard to find.
Consensus forecast for 2014 growth in China is 7.4%, just below the official target rate set by the government (a number widely believed to be massaged so as to produce the required level).
GDP expansion at 7.4% would be the slowest in 24 years.
Something that's causing alarm among resource companies reliant on Chinese demand.
China watchers are now waiting with bated breath for the government to inject cash to rev up the economy again.
Just like the $640 billion (4 trillion yuan) package delivered in 2008-2009 that made China the only major economy to continue growing strongly through the financial crisis.
That's not going to happen says Capital Economics.
The independent research house parsed Premier Li Keqiang's speech delivered to a meeting of provincial leaders last week.
He spoke of "targeted measures", mentioned "last year's successful experience in fighting the economic slowdown" and cautioned on shifting macroeconomic policies" which may be effective in the short term but is not necessarily beneficial for the future":

The key contrast here is not just with the stimulus of 2008/09 but also with the mini-stimulus of 2012. Two years ago, as after the global financial crisis, government support took the form of across-the-board credit loosening. Policymakers took a different, more discriminating, approach in the spring and summer of last year when, as now, many were worrying about a hard landing.
Support came in the form of speeded up project approvals and budgetary spending. Credit growth slowed. This provides a model for what to expect over the months ahead. We are likely to see some new infrastructure projects given the go-ahead, work on ongoing projects accelerated, some restrictions loosened – notably on property purchases – and faster disbursement of some budgeted funds.

In any event, when looking at China in absolute terms the slowdown does not seem so alarming anymore.
Growth in 2014 would indeed be the slowest since 1990 – in the mid-Nineties Chinese growth rates peaked at an eye-watering 30%.
But mainland China is tacking onto its economy some $700 billion this year.
That's equal to the size of its entire economy in 1994.
And as big as the Swiss economy and the equivalent GDP of two South Africas and four New Zealands.