Europe Folds As Putin Tells It To Pay Ukraine's Gazprom Bill, Or Else ... 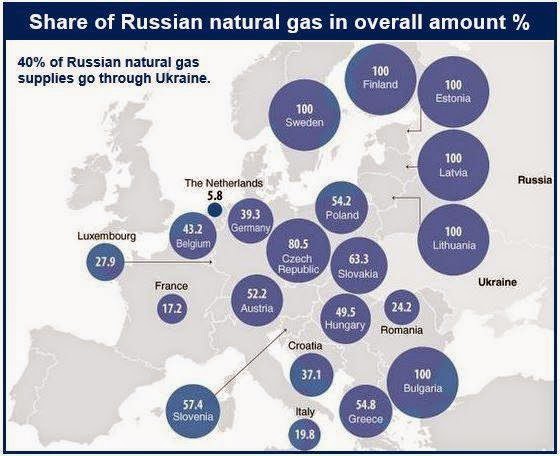 Another day ending in "y" means another day in which Putin plays the G(roup of most insolvent countries)-7 like a fiddle.
The latest: Europe should provide aid to Ukraine to ensure uninterrupted natural-gas deliveries to the region, President Vladimir Putin’s spokesman said as reported by Bloomberg.
"Russia is the only country helping Ukraine’s economy with energy supplies that are not paid for,"  Dmitry Peskov told reporters today in Moscow,  commenting on President Vladimir Putin’s letter yesterday to 18 European heads of state. “The letter is a call to immediately review this situation, which is absurd on the one hand and critical on the other.
Said otherwise: PUTIN SAYS EUROPE GAS TRANSIT DEPENDS ON UKRAINE: IFX
Or, as we explained yesterday, Russia is quite happy to keep the EU gas flowing... as long as Ukraine has enough gas in storage to assure Gazprom it won't syphon off gas destined for Europe. So how much gas does Ukraine need to pre-stock? About $4-5 billion worth. The problem is that Ukraine doesn't have a dime to spend on gas.
So putting the question aside if Ukraine will or won't import even one bcf of Russian gas ever again (thanks to some fracking or US natgas exporting magic), what Putin just said is that if Europe wants an uninterrupted supply of gas it better find a way to fund Ukraine to the tune of up to $5 billion, or else the gas may just get shut off.
And guess what: Putin is about to win yet again:

European Energy Commissioner Guenther Oettinger is working on a plan to help Ukraine pay some of its gas bills to Russia, he told Austria's ORF radio on Friday, saying there was "no reason to panic" about Russian gas supplies to Europe.

"We are in close contact with Ukraine and its gas company to ensure that Ukraine remains able to pay and the debts that the gas company has to Gazprom do not rise further," he said, adding he would meet Ukraine's energy and foreign ministers on Monday.

"I am preparing a solution that is part of the aid package that the IMF, the European Union and the World Bank is giving to Ukraine and from which payment for open bills will be possible."