Rupee shackled in a range 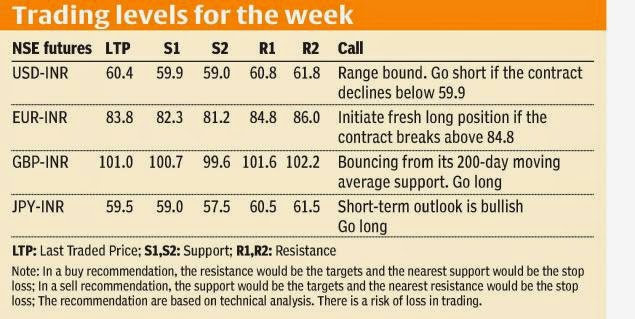 The Indian rupee has been stuck in a sideways range between 59.6 and 60.4 for more than two weeks. As the general elections kicked off last week, the currency weakened from its high of 59.78 on Monday to 60.34 on Friday before closing at 60.17, down 0.15 per cent for the week.
Weak macro-economic data releases in the past week could keep the rupee under pressure. The trade deficit for March hit a five-month high of $10.5 billion and exports declined 3.15 per cent year-on-year.
However, gold import curbs have narrowed the deficit for this fiscal to $138.59 billion from $190.33 billion. In addition, the index of industrial production for February fell 1.9 per cent after a 0.8 per cent rise in January.
Following these weak data releases, the market would be keenly watching the inflation data due for release in this truncated week, which has just three trading days.
Both consumer price and wholesale price inflation data are due for release on Tuesday. There is some mild good news for currency traders. SEBI has reduced the margin requirement for dollar-rupee contracts with effect from April 15. The margins were raised in July last year. Trading volumes are expected to pick up following the lower margin requirements. Though foreign institutional investors continue to buy Indian equities, the outflows from debt limit the rupee’s strength. FIIs bought $409 million in equity while selling $386 million of debt last week.
Dollar index

The dollar index tumbled 1.2 per cent last week as the euro and yen strengthened sharply. The index has crucial support at 79, which if broken could turn the outlook bearish for a fall to 77. On the other hand, a reversal from 79 would keep the 79-81.5 sideways range intact. The rupee is likely to hover in a range between 59.6 and 60.4 in the shortterm. The 21-day moving average at 60.43 is a key short-term support.
Dollar-rupee outlook

The rupee could weaken to test this level while it remains below 60. A decline below 60.43 could drag the currency lower to 60.7 in the short-term. However, 60.7 is a strong support that can limit the short-term weakness. A close above 60 is needed for the short-term bias to turn positive and test 59.6 again. A breach of 59.6 would see the rupee strengthen to 59.45 and 59.3. The medium-term outlook is bullish for the rupee to test 59 and even 58.
However, an intermediate fall to 61 and 62, key medium-term supports, cannot be ruled out.
Posted by Unknown at 9:52 AM