As we have heard numerous times this year already, tomorrow may be 'another' most important day of the year/cycle as Mario Draghi and his band of merry men at the ECB appear to be finally cornered (by market exuberance, macro weakness, and excess positioning) into "doing" something as opposed to just talking about it. While we have discussed the ins and outs of the potential for a small focused ABS bailout QE,negative rates, and why whatever Draghi does tomorrow will have minimal impact on the real economy; Bloomberg provides a quick and easy guide to the five things to watch for from Mario Draghi today.

1. Which interest rates will Draghi cut, and how far?
While all but two of 60 economists surveyed by Bloomberg News predict a cut in the main refinancing rate from the current record-low 0.25 percent, they’re divided over the size of the reduction. Twenty one economists predict the ECB will lower its benchmark by 10 basis points to 0.15 percent; 34 analysts forecast a cut by 15 basis points to 0.10 percent. Three expect the rate to fall even further.
The majority of economists in a separate survey predict the ECB will become the first major central bank to introduce a negative deposit rate, with 32 of 50 analysts saying the rate will be cut to minus 0.10 percent and 12 forecasting a reduction to minus 0.15 percent. Such a move would weaken the euro, which has appreciated 4 percent against the dollar in the past 12 months. Only six economists see the ECB keeping the deposit rate at zero.
2. Which non-standard measures is Draghi debating?
Policy makers are contemplating a package of measures, and analysts from Goldman Sachs Group Inc. to Nomura International Plc expect a rate cut to be complemented by tools aimed at reigniting credit supply. “The combined use of several monetary-policy instruments is conceivable,” Executive Board member Peter Praet said in an interview with Die Zeit.
Longer-term loans to banks conditional on increased lending to companies may take center stage, with a program modeled on the Bank of England’s Funding for Lending Scheme being one option officials have discussed. Other measures up for debate include the suspension of sterilizing crisis-era bond purchases, changes in reserve requirements and collateral policy and an extension of the fixed-rate, full-allotment regime currently scheduled to be in place until July 2015, under which banks can borrow as much cash as they like against eligible collateral.
3. How serious is the threat of deflation in the euro area?
Inflation, which the ECB aims to keep just under 2 percent, has remained below 1 percent since October and slowed to 0.5 percent last month. In March, the ECB predicted it won’t return toward its goal until the end of 2016. Draghi is set to unveil new staff projections on prices, growth and unemployment that may force the ECB further into uncharted territory.
4. What can the ECB do later in the year if the situation worsens?
Draghi said on April 24 that large-scale asset purchases would be justified if the medium-term outlook for inflation worsens. Any program would target a mix of assets to reduce “term premia across markets and jurisdictions,” Executive Board member Benoit Coeure said on April 13.
The ECB and Bank of England have called on regulators to ease rules on asset-backed securities in Europe. That would provide a broader range of funding options for companies and create assets the ECB could buy to supply liquidity.
5. What else is on the ECB’s agenda?
Draghi may be quizzed on the progress the ECB has made on minutes. Officials started drafting trial versions earlier this year and are debating a reduction in the frequency of rate-setting meetings once they start publishing the accounts.
Developments in the ECB’s comprehensive assessment of the banking system may also be a topic in the press conference, in particular in how it may take account of rising legal costs after U.S. authorities threatened to levy a $10 billion dollar fine on BNP Paribas SA for breaching trade sanctions. In addition, the place of Dexia SA, the bailed-out French-Belgian lender, in the Comprehensive Assessment may be raised, after the ECB supervisors decided to exempt it from a stress test.
*  *  *
And so while they are the key five questions... here is what the world is hoping for / expecting... 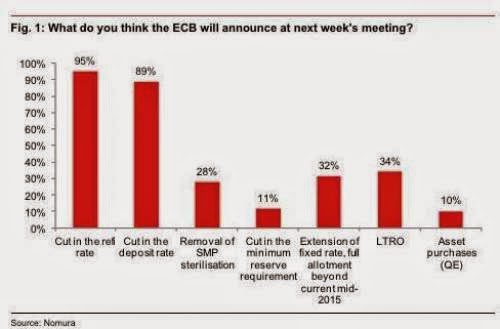