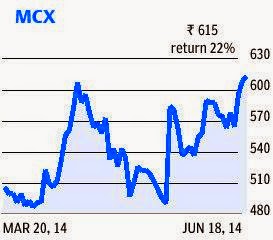 In a major relief, the Multi Commodity Exchange has received shareholder approval to transfer promoter Financial Technologies’ stake into an escrow account, and sell it off if the promoter fails to find a suitor for the same.
Commodity market regulator, Forward Markets Commission, declared Financial Technologies (FTIL) not ‘fit and proper’ to hold stake in the commodity exchange, after its subsidiary National Spot Exchange failed to settle trades worth ₹5,600 crore entered on its platform. The Commission directed FTIL to pare its stake to two per cent from 26 per cent.
Stumbling blockThe re-negotiation of the technology supply contract FTIL has with MCX seemed to be the stumbling block in stake sale. The contract has a tenure of 33 years with stringent exit clauses, delaying the re-negotiation.
Since there was not much progress in the implementation of its order, FMC banned MCX from launching new contracts till the promoter abides by its order.
Caught between the promoter and the regulator, the board of MCX sought shareholder approval to amend the Articles of Association and transfer the promoter’s stake to the escrow account, and put it on sale to meet the regulators’ diktat.
Of the 267 valid ballots, 13 shareholders voted against the resolution to alter the Memorandum of Association of the company, while 16 investors voted against the second resolution on alteration to Articles of Association of the company. Nearly 27 per cent of the non-FTIL shareholders participated in the voting for two resolutions and both the resolutions were approved by around 95 per cent voting in favour. FTIL was not allowed to participate in the voting process.
The first resolution was to give powers to sell stake of FTIL while the second was an amendment in the Articles of Association.
Shares of MCX were up 0.6 per cent at ₹615.65 on Wednesday.
Posted by Unknown at 12:31 PM