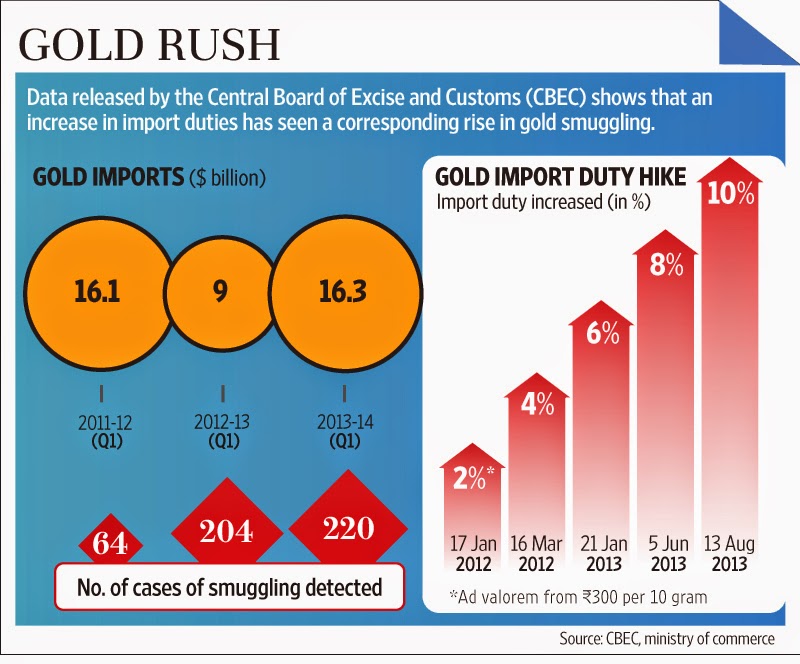 The government is likely to reduce the import duty on gold and ease restrictions on the gems and jewelry sector in the budget on July 10.
There are indications that the budget can announce a marginal cut in duties to prevent a sudden surge in imports. Gold duty has been raised to 10 per cent from 4 per cent.
The government is also keeping a close eye on the developments in Iraq. A senior finance ministry official said the rise in global crude oil prices following the unrest in Iraq was unlikely to stall the move to cut duties.
“There have been discussions on Iraq and the spike in crude price. The current account deficit (CAD) will be very much in control this fiscal,” the official said, indicating the assessment of the government on the current geopolitical situation and its impact on the economy.
If the unrest in Iraq escalates, it can push up crude oil prices, resulting in higher diesel and fuel rates.
Besides, the high oil import bill will result in dollar outflows and hurt the rupee’s value and the current account deficit (CAD).
According to some estimates, even if the crude prices move up to $120-$125 (the worst-case scenario), CAD will still be below 3 per cent of GDP (gross domestic product) in 2014-15.
CAD had dropped sharply to 1.7 per cent of GDP, or $32.4 billion, in 2013-14, on the back of plunging gold imports.
Analysts said the below-normal monsoon could also weaken demand as much of the yellow metal is purchased by farmers.
“If crop production is lower because of poor monsoon, it will mean less money for farmers to put towards gold purchases. Already the demand is subdued because of high duties. There are hopes that the government may relax those duties, but if the farmer income falls because of a poor harvest, it is possible gold demand may not get much of a bounce,” analysts said.
“Going forward, we expect some widening of trade deficit on the back of gold demand picking up on expectation of a reduction in import duties. However, the extent of trade gap is unlikely to be worrisome as we expect exports to maintain good performance,” Yes Bank chief economist Shubhada Rao said.
Gems and jewelry
The government is also set to ease the 80:20 scheme for the gems and jewellery sector. Under the scheme, nominated agencies are allowed to import gold on the condition that 20 per cent of the inward shipment will be exported.
Gems and jewellery exports account for about 15 per cent of India’s total outbound shipments and exporters have been urging the government to lift the import curbs.
Vipul Shah, chairman of the Gems and Jewellery Export Promotion Council, said, “The 10 per cent duty makes the operations of smuggling economically viable. Also, it is an appropriate time to scrap the 80:20 scheme as the CAD is under control.”
Posted by Unknown at 11:58 AM