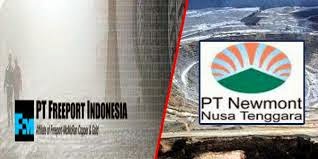 The chief executives of Freeport McMoRan Copper & Gold Inc and Newmont Mining Corp are both in Indonesia's capital, marking what might be a last-ditch effort to resolve a dispute over a mineral export tax before a new administration takes over in October.
Richard Adkerson, the CEO of U.S.-based Freeport, was in Jakarta again less than a week after talks with Indonesia's new chief economics minister failed to make a major breakthrough on an escalating export tax that has halted copper concentrate shipments since January. [ID:nL3N0OL1D8]
"Yes he is," Freeport spokeswoman Daisy Primayant said in a text message on Thursday, when asked whether Adkerson was back in Jakarta. She did not elaborate.
Newmont CEO Gary Goldberg, who was not involved in last week's talks, was in the capital to "demonstrate the company's seriousness in supporting the government's policy to increase domestic smelting", spokesman Omar Jabara said in an email.
He said Goldberg hopes to meet with "several government officials".
Indonesia's chief economics minister and billionaire businessman, Chairul Tanjung, is spearheading a new government push aimed at brokering a deal with foreign miners to restart copper concentrate exports that halted five months ago. [ID:nL3N0OJ12N]
Both Freeport and fellow U.S.-based copper and gold miner Newmont have previously argued they should be exempt from the tax, which kicks in at 25 percent and rises to 60 percent in the second half of 2016, before a total concentrate export ban in 2017. They say their current contracts prohibit any extra taxes.
The export tax is part of a government drive to force miners to build smelters and processing plants in Southeast Asia's largest economy, but a lack of progress in resolving the stalemate last week led to Newmont declaring force majeure.
Although government officials have said Freeport has agreed to pay the tax, with the percentage tied to progress made in smelter construction, the extension of the Arizona-based miner's contract beyond 2021 appears to now be a stumbling block.
While Freeport says it needs the certainty of a contract extension before investing more than $15 billion to turn its Grasberg complex into an underground mine when open-pit activities end after 2016, the outgoing government says it cannot legally do this.
Government officials have previously said Freeport can only renew their 2021 deal in 2019 at the earliest.
"The government at the moment has no right to extend Freeport's contract that ends in 2021," Tanjung told reporters on Thursday. "Freeport has asked for that extension but ... the current government doesn't have the right."
The government has consulted legal experts to see whether there is room for manoeuvre on the 2019 contract stipulation, and has proposed signing a legally binding MoU with Freeport to bypass the contract extension issue.
Indonesia holds a presidential election on July 9, with a new administration set to take office in October. Current President Susilo Bambang Yudhoyono has served the maximum two terms.
Posted by Unknown at 11:06 AM