After several months of steady decline, the price of aluminum surged 5 percent during the month of April. Some have suggested that the recent price activity could signal a turnaround, but prices remain low from a historical perspective and until we see further strength, the current rally appears to be a normal market reaction amid a longer-term downtrend.

This price, however, is not in line with the prices seen by commercial buyers and industry analysts in North America. For the past few years, this decline in the LME aluminum price has been offset by a surge in the US Midwest (MW) premium which has led to a situation where the MW premium represents an ever-increasing percentage of the all-in cost.

The disconnect between the price quoted on the London Metal Exchange and the deliverable price of aluminum has made it increasingly difficult for hedgers and investors to use the LME contract as their benchmark for physical aluminum. The price that producers, manufacturers, analysts and investors are trying to forecast roughly translates to the LME price + the MW premium.  The CME Group’s Midwest Premium contract (AUP) helps commercial market participants hedge the MW premium portion of their risk, but a mix of two price markers is not an ideal situation for anyone. 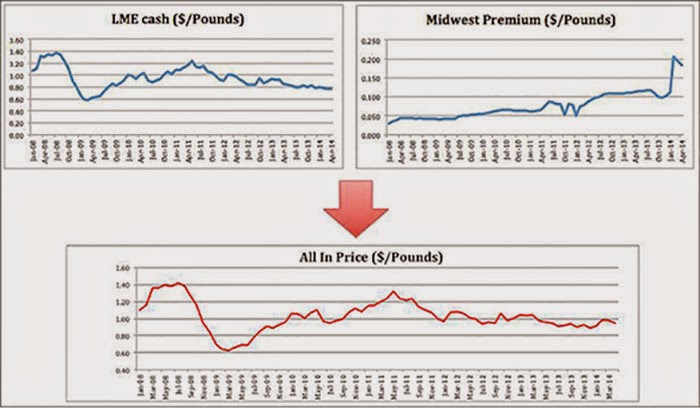 Major producers, commercial buyers and financial firms have all expressed interest in a transparent benchmark that will allow them to efficiently hedge and invest in the “all in” price of aluminum.  As a result, CME Group launched a physically settled aluminum contract to specifically address these issues.  CME Group’s new contract incorporates all available information into a single price and provides commercial buyers with a swift and efficient delivery process for the physical metal.
Tim Weiner, MillerCoors Global Risk Manager recently said in regard to the CME ALI contract, “We firmly believe the contract can become the new benchmark for the North American aluminum industry…I applaud CME Group for responding to the concerns of aluminum users like MillerCoors and bringing this new risk management tool to market.”
CME Group’s “all in” ALI contract launched on May 6th and garnered early support from the industry’s largest participants including UC Rusal, Reynolds Consumer Products and MillerCoors along with Macquarie Bank executing the first trades.
Will the Contract Be Successful?
That remains the $800m question but early indications appear positive for a number of reasons. First, large industrial buying organizations gave the contract its initial liquidity – a most necessary step. Second, though not a lot from a daily volume perspective open interest continues to grow – initially through the first six months and now through May 2015. Third and perhaps most important, we see the makings of a dynamic forward curve which helps industrial buyers and other market participants create a Midwest price benchmark. 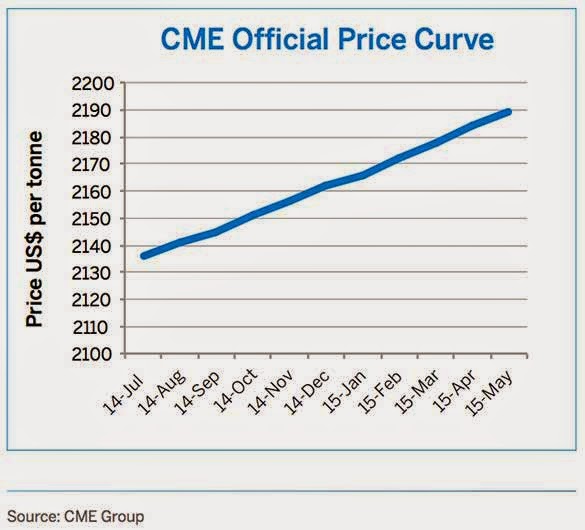 In addition, CME Group has confirmed banks have begun to open trading accounts with FCM’s (Futures Commission Merchants), many with interest in physical delivery.
But the ultimate test involves whether or not an end user can gain access to his or her material as described in the CME Group contract specifications – when, where and for the price specified.
And this last piece – efficient product delivery – will provide industrial buying organizations with the confidence to move more of their positions on to the screen creating a dynamic forward price curve.  If successful, aluminum buyers will once again have the ability to accurately define and manage their aluminum price risk.
Posted by Unknown at 1:06 PM