In New York trade on Monday September copper extending a rally to reach a high of $3.1765, sparked by a continuing drawdown of inventories around the world.
It's the tenth straight day of gains for the red metal after coming dangerously close to breaching the $3.00 a pound level at the start of June for the second time this year.
The rally is the longest winning streak for the metal since 2005. LME copper also showed some strength climbing to $6,955 a tonne.
Gains for copper come on the back renewed optimism about more robust global economic growth after strong manufacturing numbers out of China and expectations of an acceleration in the US economic recovery.
The copper price is highly correlated with economic growth thanks to the widespread use of the metal in the construction, transport and power industries.
Inventories at warehouses managed by the LME and those in New York and Shanghai, fell to a six-year low on Thursday – 50% in 2014.
The global refined copper market swung to a surprise shortage in March and a 205,000 tonnes deficit for the first three months of the year, compared with a 206,000 tonnes surplus in the same period in 2013, preliminary data from the International Copper Study Group showed on Monday.

The Qingdao issue is raising concern over the status of supplies

Defying market expectations, the copper price has dug itself out of a near four-year low struck mid-March of $2.92 a pound.
The metal remains 5.7% down in 2014 as the market adjusts to slower growth in China which consumes more than 40% of the world's copper demand of some 21 million tonnes.
A complicating factor in predicting the copper market this year is Beijing's crackdown on the use of commodities as collateral for letters of credit.
On Thursday it was revealed authorities uncovered massive fraud in the China's gold-backed loan industry, which comes on the heels of a probe into allegations that several companies pledged the same copper, iron ore and other industrial metals held at the port of Qingdao as collateral for loans to different banks.
Fears that these stocks will be dumped onto the market as these deals unwind forcing prices down and creating a vicious circle have spooked the industry, especially iron ore. 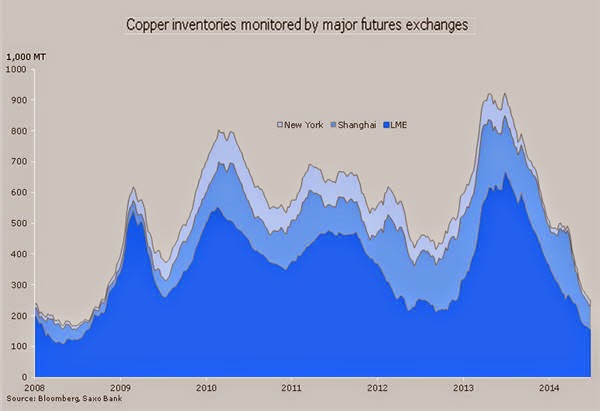 In sharp contrast to copper Chinese iron ore inventories remain close to record highs of 115 million tonnes and the price of the commodity is already down some 30% this year.
Another theory doing the rounds is that, at least for copper, the shadow banking crackdown could actually turn out to be a boost:
"The Qingdao issue is raising concern over the status of supplies, with physical copper in Shanghai now commanding a premium over front-month futures, having been trading at a discount earlier this month.
"Another potential impact from Qingdao is that Chinese imports of metals will decline in coming months, as traders find themselves shut off from letters of credit."
Chinese copper imports tumbled 16% in May compared to the previous month, but year to date China is still importing refined copper at a record setting pace – up a whopping 34% over 2013 to 2.1 million tonnes.
Other base metals have also enjoyed a good run.

Zinc is trading near a 16-month high

Lead has advanced 5% this year and is now back to highs last seen in February this year above $2,150 a tonne.
The imminent closure of several lead-zinc mines including the Century mine in Australia have raised fears of a supply shortage.
Nickel continues to be the strongest performer gaining 13% just over the last three months in response to Indonesia’s export ban on unrefined mineral ores. Nickel prices scaled $21,000 a tonne in May, but has since settled back to the mid-$1,800s.
The Ukrainian crisis also underpinned the price of the steelmaking raw material over fears of increased sanctions against Russia – Norilsk accounts for approximately 17% of global nickel output.
Tin is the laggard of the sector trading close to its opening levels of 2014 at $22,425 per tonne.
Tin has followed the opposite path to copper. Expectations was for a rise in the price on predictions of a market deficit, but warehoused stock has been on a rising trend reaching 11,185 tonnes on Thursday, up nearly 40% over the past four months.