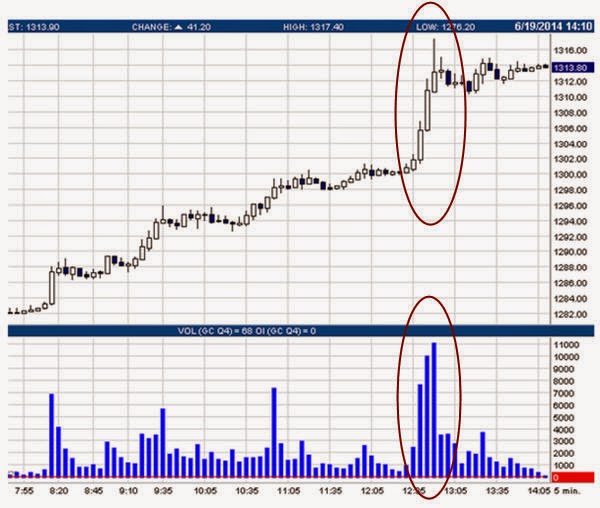 The gold price scaled $1,300 an ounce for the first time in more than a month, after comments by US Federal Reserve chair Janet Yellen yesterday and a huge buyer lit a fire under traders.
On the Comex division of the New York Mercantile Exchange, gold futures for August delivery – the most active contract – jumped to a day high of $1,322.00 an ounce, up $49.30 or nearly 4% from yesterday's close.
After months of subdued trade on gold futures markets volumes surged on Thursday leaping past 210,000 contracts – double recent daily averages – by mid-afternoon.
As the chart shows, after a steady climb throughout the morning, during lunchtime volumes suddenly spiked with more than 2.9 million ounces (82 tonnes) changing hands in three big chunks in the space of 15 minutes.
Gold built on its gains from there to settle at $1,320.40, the the best one day performance for the metal since September last year.
The chart looks almost like the inverse of the trading pattern on April 15 this year when exactly year to the day of 2013's $200 shocker another strange gold price plunge occurred.
Gold's positive move started yesterday after Yellen, speaking at the latest meeting of the Fed's interest rate committee, said she was comfortable interest rates could stay low for a considerable period, which sent the dollar tumbling against the euro and pound sterling.
Gold and the US dollar usually moves in the opposite directions and gold's perceived status as a hedge against inflation is also burnished when central banks flood markets with money.
Monetary expansion, particularly since the financial crisis, has been a massive boon for the gold price. Gold was trading around $830 an ounce when previous chairman Ben Bernanke announced the first program of quantitative easing in November 2008.

The QE program together with other stimulus measures saw the balance sheet of the Fed cross the $4 trillion mark in January, up 400% in seven years.
The US has not been alone in printing money and together with the Bank of Japan, the European Central Bank and the Bank of England, more than $15 trillion of easy money is now sloshing around in the system.
Earlier this month the ECB took the unprecedented step of moving rates into negative territory.
Posted by Unknown at 9:01 AM