The gold price added $3 to end at $1,320 on Friday, making it the third straight week of gains for the precious metal.
Gold's $50 an ounce surge on June 19 startled what had been a sleepy market forcing the smart money to play catch up.
Data released after the close on Friday showed hedge funds and other large gold investors adding a record amount of ounces to their bullish positions.
According to Commodity Futures Trading Commission data bearish or short positions held by so-called managed money fell by nearly 25,000 contracts in the week to June 24.
Speculators added almost the same number bullish or long positions – bets that the price will go up – translating into a 61% net gain of 47,784 contracts or 4.8 million ounces.
This is probably the biggest weekly increase on record or at least since 2007 when the CFTC changed the way data is collected says Ole Hansen, head of commodity strategy at Saxo Bank.

Significantly, it is also the the first time during the recent rally the increase was not only driven by short covering but also the addition of new longs, according to the Danish bank.
On a net basis hedge funds now own net longs of over 120,000 lots or 12.1 million ounces, levels last seen in March when gold hit its 2014 high of $1,380.
Managed money is also moving heavily into silver with net longs increasing almost four-fold by 19,623 contracts to 24,757 almost equaling the February high of 25,090 contracts, CFTC data shows. 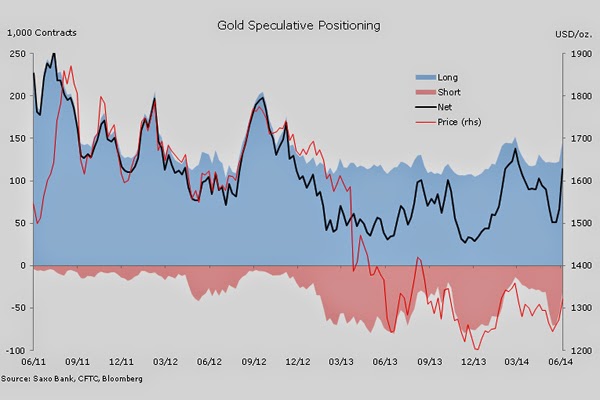 Precious metals have outperformed other commodities this year with double digit gains for palladium and gold and a strong performance for platinum and silver.
The positive momentum may now be spilling over to other sectors.
A  new survey by investment bank Credit Suisse of 350 investors, including institutions, hedge funds, large corporations and mutual funds show a change in sentiment to commodities:
"When asked 'What do you expect your level of investment to be over the coming 12 months?', 42% of respondents said 'overweight,'" – up sharply from the 19 percent who expressed such optimism in 2013 according to Credit Suisse.
Posted by Unknown at 11:44 AM