17 Facts To Show Anyone That Believes That The U.S. Economy Is Just Fine 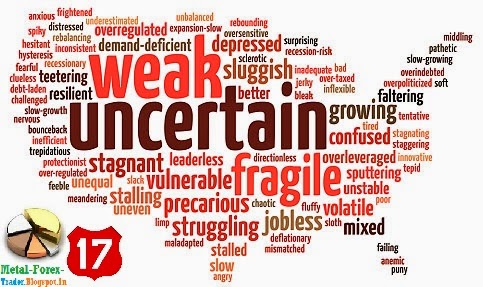 No, the economy is most definitely not "recovering".  Despite what you may hear from the politicians and from the mainstream media (shrugging off today's terrible GDP print), the truth is that the U.S. economy is in far worse shape than it was prior to the last recession.  In fact, we are still pretty much where we were at when the last recession finally ended.  When the financial crisis of 2008 struck, it took us down to a much lower level economically.  Thankfully, things have at least stabilized at this much lower level.  For example, the percentage of working age Americans that are employed has stayed remarkably flat for the past four years.  We should be grateful that things have not continued to get even worse.  It is almost as if someone has hit the "pause button" on the U.S. economy.  But things are definitely not getting better, and there are a whole host of signs that this bubble of false stability will soon come to an end and that our economic decline will accelerate once again.  The following are 17 facts to show to anyone that believes that the U.S. economy is just fine...
#1 The homeownership rate in the United States has dropped to the lowest level in 19 years.
#2 Consumer spending for durable goods has dropped by 3.23 percent since November.  This is a clear sign that an economic slowdown is ahead.
#3 Major retailers are closing stores at the fastest pace that we have seen since the collapse of Lehman Brothers.
#4 According to the Bureau of Labor Statistics, 20 percent of all families in the United States do not have a single member that is employed.  That means that one out of every five families in the entire country is completely unemployed.
#5 There are 1.3 million fewer jobs in the U.S. economy than when the last recession began in December 2007.  Meanwhile, our population has continued to grow steadily since that time.
#6 According to a new report from the National Employment Law Project, the quality of the jobs that have been "created" since the end of the last recession does not match the quality of the jobs lost during the last recession...
#7 After adjusting for inflation, men who work full-time in America today make less money than men who worked full-time in America 40 years ago.
#8 It is hard to believe, but 62 percent of all Americans make $20 or less an hour at this point.
#9 Nine of the top ten occupations in the U.S. pay an average wage of less than $35,000 a year.
#10 The middle class in Canada now makes more money than the middle class in the United States does.
#11 According to one recent study, 40 percent of all Americans could not come up with $2000 right now even if there was a major emergency.
#12 Less than one out of every four Americans has enough money put away to cover six months of expenses if there was a job loss or major emergency.
#13 An astounding 56 percent of all Americans have subprime credit in 2014.
#14 As I wrote about the other day, there are now 49 million Americans that are dealing with food insecurity.
#15 Ten years ago, the number of women in the U.S. that had jobs outnumbered the number of women in the U.S. on food stamps by more than a 2 to 1 margin.  But now the number of women in the U.S. on food stamps actually exceeds the number of women that have jobs.
#16 69 percent of the federal budget is spent either on entitlements or on welfare programs.
#17 The number of Americans receiving benefits from the federal government each month exceeds the number of full-time workers in the private sector by more than 60 million.
Taken individually, those numbers are quite remarkable.
Taken collectively, they are absolutely breathtaking.
Yes, things have been improving for the wealthy for the last several years.  The stock market has soared to new record highs and real estate prices in the Hamptons have skyrocketed to unprecedented heights.
But that is not the real economy.  In the real economy, the middle class is being squeezed out of existence.  The quality of our jobs is declining and prices just keep rising.  This reality was reflected quite well in a comment that one of my readers left on one of my recent articles...

It is getting worse each passing month. The food bank I help out, has barely squeaked by the last 3 months. Donors are having to pull back, to take care of their own families. Wages down, prices up, simple math tells you we can not hold out much longer. Things are going up so fast, you have to adopt a new way of thinking. Example I just had to put new tires on my truck. Normally I would have tried to get by to next winter. But with the way prices are moving, I decide to get them while I could still afford them. It is the same way with food. I see nothing that will stop the upward trend for quite a while. So if you have a little money, and the space, buy it while you can afford it. And never forget, there will be some people worse off than you. Help them if you can.

And the false stock bubble that the wealthy are enjoying right now will not last that much longer.  It is an artificial bubble that has been pumped up by unprecedented money printing by the Federal Reserve, and like all bubbles that the Fed creates, it will eventually burst.
None of the long-term trends that are systematically destroying our economy have been addressed, and none of our major economic problems have been fixed.  In fact, as I showed in this recent article, we are actually in far worse shape than we were just prior to the last major financial crisis.
Let us hope that this current bubble of false stability lasts for as long as possible.
That is what I am hoping for.
But let us not be deceived into thinking that it is permanent.
It will soon burst, and then the real pain will begin.
Article by Michael Snyder of The Economic Collapse blog.
Posted by Unknown at 1:42 PM