Nickel price rise: too much too soon says new report.

Indonesia surprised the mining world in January putting into effect an outright ban on nickel ore exports.
After a relatively subdued initial reaction on nickel markets – no-one thought the Asian nation would go through with the ban and when it did, the expectation was that the rules would be water down substantially – the price of the steelmaking raw material is now up 32% in 2014.
Indonesia accounted for around a fifth of global supply at an estimated 400,000 tonnes of contained metal so the potential was there for a big impact on the price.
But record inventories around the globe (hitting 285,000 tonnes in March), massive stockpiling by China's nickel pig iron producers ahead of the ban, and years of growing mine supply (11% per year since 2009 to 2 million tonnes), kept the price near financial crisis levels by the end of January.

Traders only really entered panic mode when supply from the world's largest producer Norilsk was also put in danger due to the possibility of sanctions against the Russian company over the crisis in Ukraine.
Three-month nickel on the LME was trading at $18,300 a tonne on Monday after gaining 15% in April making it the best-performing commodity. The nickel price is up from around $14,000 at the start of the year.
The Financial Times (paywall) quotes Jim Lennon, commodities consultant at investment bank Macquarie as saying "every hedge fund manager and his dog is long on nickel," adding that he expects prices to rise as high as $30,000 a tonne in 2016 if the ban remains.
Others are less sanguine about the outlook for the price, at least for this year.
Independent macro-economic research house, Capital Economics, in a new report on Monday warns that the price move "is looking premature at best and, at worst, overdone":
"The market will remain in surplus and other producers may raise output in response to the recent price strength. So far, and despite Indonesia’s export ban, stocks have only just started to slip, suggesting the market is not as tight as the price rise suggests. Indeed, the high level of open interest [in LME nickel] makes the market look vulnerable to a price correction."
Capital Economics believe the nickel price will fall back from current levels to $17,500 per tonne at the end of the year, but will rise to $19,000 at end-2015 when "the full impact of Indonesia’s export ban will be felt once stocks have been drawn down." 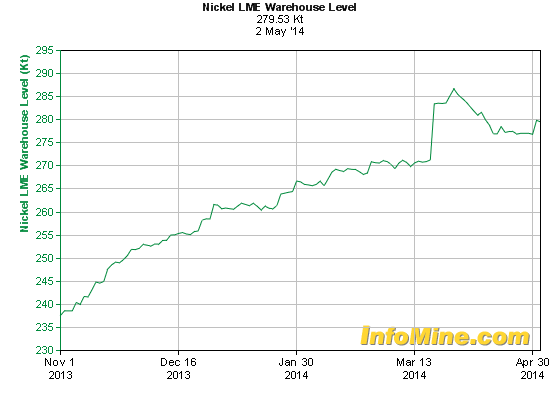