Chile’s Codelco, the world’s top copper producer, said Friday (in Spanish) output dropped slightly in the first quarter and its profit dived as metal prices fell and ore grades deteriorated.
The company posted a 0.3%$ drop to 383,000 metric tonnes, and said its pre-tax profit tumbled 38% to $539 million.
The miner said efforts to reduce production costs partially helped to offset the sharp drop in revenue, as copper prices averaged $3.194 a pound in the first three months of the year, a value that is 11% lower than in the same period of 2013. 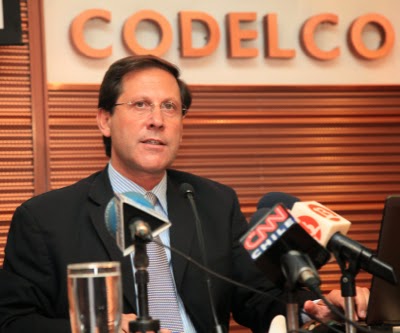 Codelco's Finance and Administration vice-president, Ivan Arriagada.
Finance and Administration vice-president, Ivan Arriagada, said that despite the slight output fall, Codelco is dealing with prices well above the average registered in the company’s history. However, he acknowledged the firm needed to continue efforts to reduce costs and increase productivity.
Codelco has seven mining divisions. Radomiro Tomic, Chuquicamata, Gabriela Mistral, Salvador, Andina, El Teniente and the new Ministro Hales mine, which began production in the last quarter of 2013 and it is set to reach its full capacity this years.
The state-owned miner also owns the Ventanas copper smelter and refinery, has a 49% stake in El Abra, a joint venture with US-based Freeport-McMoRan Copper & Gold, and —since 2012— owns 20% of Anglo American Sur.
Chile expects mining investment to reach $112 billion by 2021, figure that includes the $27bn planned by Codelco. By the same year, the country’s total copper production is projected to reach an annual 8.1 million metric tons.
The red metal accounts for 60% of Chile's exports and 15% of gross domestic product.
Posted by Unknown at 1:00 AM