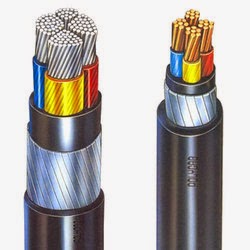 In New York trade on Wednesday copper rallied after much stronger than anticipated US GDP figures, reaching a high of $3.2625.
Defying market expectations, the copper price dug itself out of a near four-year low struck mid-March of $2.92 a pound and has gained more than 7% since early June. The metal is now down only 4% in 2014.
The copper price is highly correlated with economic growth thanks to the widespread use of the metal in the construction, transport and power industries, and the robustness of the red metal is prompting industry to switch to much cheaper aluminum for some applications.
Primarily recovered from bauxite ore, aluminum was trading on par with copper in 2002, but while copper has quadrupled since then, the aluminum price has gone nowhere.
FT.com reports "demand for aluminium cable, especially in the power industry, is already rising at the expense of copper":
Even though aluminium cables require a thicker core of metal – and thus more insulation – the weak LME price means that the overall cost is still around 40 per cent lower than for copper cables, according to the French company Nexans, a leading cable producer.
It's a trend already established in China and Gulf states where only 25% of insulated and overhead cables use copper versus 60% in developed economies.
Posted by Unknown at 8:57 AM