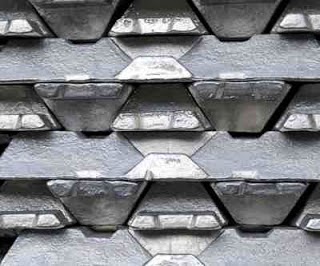 Zinc prices rose to a 35-month high as inventories dwindled amid speculation that increasing auto sales in China and the U.S. will boost metal use.
Zinc stockpiles monitored by the London Metal Exchange have dropped 29 percent this year to the lowest since December 2010. Auto sales in China climbed 14 percent in June, an industry group said yesterday. In the U.S., new-vehicle demand surged in May and June, Bloomberg Industries said.
“Demand, particularly in the U.S., probably picked up,” Patricia Mohr, a commodity market specialist at Scotiabank Group in Toronto, said in a telephone interview. “We’re seeing a bit of a recovery in industrial production in the U.S., largely linked to strong auto production. It’s probably reasonably good in China as well.”
Zinc for delivery in three months gained 0.8 percent to settle at $2,282 a metric ton at 5:50 p.m. on the LME. Earlier, the price reached $2,318.50, the highest since Aug. 5, 2011.
The International Zinc Association says the metal is used to coat medium-gauge steel sheet used in auto-body panels. The price has gained 21 percent in the past 12 months.
Zinc, copper and lead markets already face supply deficits while nickel and aluminum are heading for shortfalls, Morgan Stanley said in a report dated today. Zinc is poised for “continued outperformance as the deficit intensifies and global auto sector strength drives demand,” the bank said.
Copper rose 0.1 percent to $7,130 a metric ton ($3.23 a pound) in London. Earlier, the price reached $7,212, the highest since Feb. 19.
The discount for a grade of scrap containing 99 percent of copper narrowed to as low as 4 cents a pound, the smallest in two years, from 8 cents in April as demand increased, Bryan Rosenstrauch, the president of Comm Trade USA Inc., a brokerage in Houston, said yesterday.
On the Comex in New York, copper futures for September delivery fell 0.1 percent to $3.257 a pound. The price climbed 5.1 percent in the past 12 months.
Nickel, lead and aluminum gained in London. Tin dropped.
Posted by Unknown at 7:00 AM