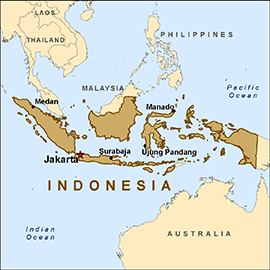 Indonesia has ended the six month ore export ban and has restarted the exports by taking new policy to improve the returns on the shipped out resources from the largest economy of Southeast Asia, said a mining ministry official.
Indonesia has imposed a ban on unprocessed metal ore exports in January and as a part of the policy to force the miners to construct domestic smelters for processing the minerals, they have levied an escalating tax on the mineral concentrate exports.
Disputes followed by the export ban stopped the monthly export of about $500 million minerals and concentrates. Before the imposition of the ban, Indonesia was the major exporter of nickel ore, iron ore and aluminium ore.
Coal and Minerals Director General, Sukhyar told that last week ships with iron ore, zinc, and lead concentrate left the nations amid the disputes, after two companies agreed to pay a 20 percent export tax. The two firms are Sebuku Iron Lateritic Ores (SILO) and Lumbung Mineral Sentosa.
SILO has shipped about 100,000 tonnes of iron ore concentrate where as Lumbung has shipped about 8,000 tonnes of lead and zinc concentrate. Sukhyar added by referring to the escalating tax that finally the companies wanted to pay it. The export tax has even made a legal dispute with the U.S miner Newmont Mining Corp.
SILO anticipated to ship about 8 million tonnes of iron ore concentrates per year where as Lumbung would export about 29,000 tonnes annually. The two companies are exporting the ores to China.
Posted by Unknown at 10:24 AM