Billionaire investor Rakesh Jhunjhunwala has bought a 1.96% stake in India's largest and only listed commodity bourse Multi Commodity Exchange of India (MCX) from its promoter Financial Technologies(FTIL) in a block deal for Rs 66 crore.

The deal values the exchange at around Rs 3,370 crore. After Tuesday's transaction on the NSE - involving 10 lakh shares having been transferred to Jhunjhunwala at Rs 664 apiece - FTIL's stake in the bourse has declined to 24%.

Jhunjhunwala, said market analysts, made a good buy by having added a company that was the leader in the commodity futures market comprising five national level and 15 regional bourses. The 'Big Bull's' purchase energised the MCX share, which rose 4.2% to hit a year's closing high of Rs 679.7 on Tuesday. 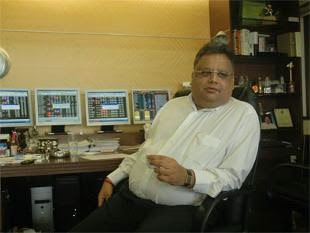 
The total market value of his portfolio was around Rs 6,700 crore on Tuesday, ETIG database shows. His purchase of a stake in MCX comes at a time when its founder and promoter FTIL has been declared unfit to hold shares in the bourse because of its alleged role in a Rs 5,600-crore scam at its subsidiary National Spot Exchange Ltd (NSEL). FTIL has challenged the regulatory order having declared it not fit and proper in the Bombay High Court.

Months ago, it began a divestment process of 24% of 26% of its stake in MCX without prejudice to its legal rights. The Kotak Group, Reliance Capital and BSE, among others, put in non-binding bids for buying FTIL's stake, but no final offer was reportedly made.

Amid myriad changes post the scam last July, MCX received shareholder approval to amend its articles of association that give it the power to transfer an unfit shareholder's stake into an escrow account and sell the same on its behalf if such a stakeholder fails to reduce its equity.
Posted by Unknown at 12:34 PM