Between 50,000 and 75,000 mining jobs will be lost in Australia over the next couple of years as the industry's US$427 billion (A$450bn) investment on new capacity slows, research by the ANZ bank released on Wednesday shows.
According to the bank, the cuts will occur because the sector is switching from the job-heavy construction stage to the operational phase, which requires fewer workers.

Falling commodity prices, with both iron ore and coal tumbling this year, will also affect job creation and could see more positions go

Falling commodity prices, with both iron ore and coal tumbling this year, will also affect job creation and could see more positions go due to mining companies and suppliers efforts to cut operational costs.
Earlier this year Glencore (LON:GLEN) shut part of its Ravensworth coal mine because the operation was uneconomical. Brazil’s Vale (NYSE:VALE) followed closing its Integra Mine Complex for the same reasons. And they’re not alone, cut backs are going on throughout the whole sector.
This ANZ chart shows the strong relationship between resources investment and job creation. Taking into account resources extraction, which is increasingly becoming a volume game, resources investment, and commodity prices, the estimates are alarming. 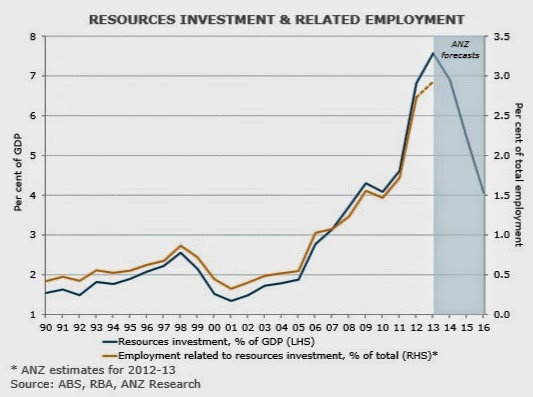 By 2016 the bank expects resources investment (the blue line) to drop from about 7.5% of GDP to 4% — almost half in nearly three years. The yellow line, which shows employment related to resource investment, implies it will follow the blue line.
As a result, the bank's economists say there will be little improvement in the nation's 5.8% jobless rate.
ANZ senior economist corporate and commercial, Justin Fabo, was quoted by The Australian saying that weaker than expected commodity prices would likely increase the risks to more job losses as mining firms seek to cut costs.
"So we think the unemployment rate will be in spitting distance of six percent over the next 12 months, and for improvement after that to be gradual," he said.
The Australian Workforce and Productivity Agency estimates there are 263,000 jobs in the resources industry, which represented an 80% increase over five years.
Posted by Unknown at 10:46 AM