US Sales To Russia Hit Record High After Sanctions

While it is all too easy to show the massive outperformance of Russian stocks (even after Carney's "sell" recommendation) as evidence that US sanctions were not 'punishing' as the mainstream media might suggest; this week's release of trade data shows the utter farce that the so-called "costs" imposed on Putin actually are. As WSJ reports, despite all the scaremongery and sanctioning, US exports to Russia in May hit $1.2 billion - a record high (up 21% from pre-sanctions). That will certainly teach them!! 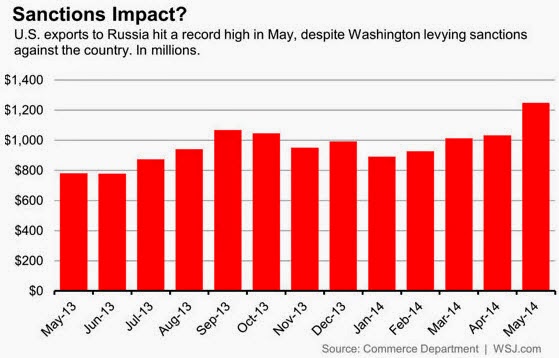 U.S. efforts to penalize Russia for its actions in Ukraine appear to have done little to stem exports of U.S. goods to the country.

The U.S. announced targeted sanctions against several Russian companies and individuals in March, but U.S. trade data published Thursday shows exports to the country were the highest on record at $1.2 billion in May.

The sanctions, organized with Europe and other major industrialized nations over Moscow’s alleged actions to destabilize its former client state, sparked investor flight out of Russia, led the ruble to tumble and pushed the economy into a recession. Russian markets have since recovered somewhat, but investors have been wary of an escalation in the sanctions battle.

Demand for U.S. products apparently hasn’t been hit, however, and in fact jumped 21% from the previous month.

So much for those sanctions - need moar targeted sectoral ones to really teach them a lesson (oh wait - what about the boomerang?)