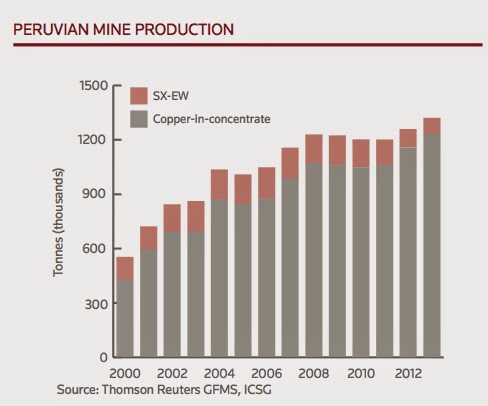 Peru is on track to double its current copper production by 2016 and so recover the second position among the world’s largest production of the industrial metal, the Minister of Energy and Mines said.

During a visit to Freeport-McMoRan Copper & Gold’s (NYSE:FCX) Cerro Verde copper complex, about 30 km southwest of Arequipa, minister Eleodoro Mayorga Alba said the country’s total production will hit 2.8 million tonnes in 2016, up from 1.4 million tonnes in 2013, thanks to five major projects slated to begin operations that year, OutletMinero (in Spanish) reported.
Freeport-McMoRan’s Cerro Verde’s $4.6 billion expansion, scheduled for completion during the first quarter of 2016, is one of those key projects, Mayorga Alba noted.
Work at Cerro Verde is 22% complete and the extended mine will start initial production in the second half of 2015, the minister added.
Another card up Peru’s sleeve is Southern Copper’s (NYSE:SCCO) controversial $1 billion Tía María mine, which is expected to begin production in March 2016.
Currently China is the second largest producer of the red metal, with an annual output of about 1.6 million tonnes per year, well below the nearly 5.8 million annual tonnes produced by Chile, the world’s leader, based on data provided by CRU Consulting.
Global copper producers —being Chile's Codelco the largest, followed by Freeport-McMoRan, Glencore (LON:GLEN) and BHP Billiton (ASX:BHP)— plan expansions of mine capacity that would add between 1.1m tonnes and 1.3m tonnes of copper per year to the market until 2016.
Such increases would be roughly equivalent to the annual output of Chile's Escondida, the world’s largest mine, which provides about 5% of the world supply.
Peru’s steady growth in recent years has been largely driven by mineral production. Last year the country injected $9.7 billion to the local economy coming from mining, jumping 14% when compared to 2012.
Authorities have said they expect to reach similar levels by the end of this year, as there is still there is plenty for everyone to get a descent piece of the resources pie. Peru holds13% of the world's copper reserves, 4% of gold, 22% of silver, 7.6% of zinc, 9% of lead and 6% of tin reserves, official figures (in Spanish) show.
Posted by Unknown at 8:50 AM