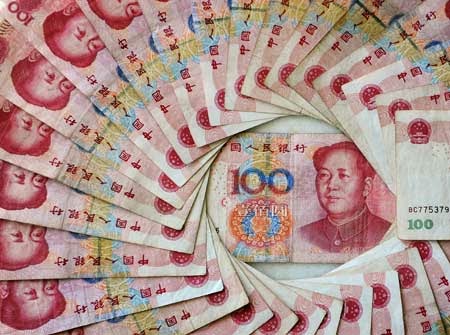 Did you notice in the last few months, that China has been establishing agreement after agreement with various major financial centres around the world, so that payments could be settled using the Chinese yuan? That's right. It would appear that world leaders have been in a race to make certain the yuan stopped at their country next.
March 2014
Bundesbank, PBOC in Pact to Turn Frankfurt into Renimbi Hub, Bloomberg Businessweek, March 28

"Germany's Bundesbank and the People's Bank of China agreed to cooperate in the clearing and settling of payments in renminbi, paving the way for Frankfurt to corner a share of the offshore market.
Germany's financial capital prevailed over Paris and Luxembourg in a euro-area race to win trade in renminbi, which overtook the euro to become the second-most used currency in global trade finance in October, according to the Society for Worldwide Interbank Financial Telecommunication."
April 2014
Bank of England and People's Bank of China Agree on London Yuan, Clearing Hub, International Business Times, April 14

"Britain and China have signed a deal to set up a yuan clearing service in London, marrying future financial transactions between the Bank of England and People's Bank of China...
Chancellor George Osborne has been focusing on the world's second largest economy and has been keen to open a yuan trading hub in the capital city as the currency poses stiff competition to the US dollar as a global medium of exchange."
May 2014
China and Russia Ink $400 Billion Gas Deal, USA Today, May 21

"China and Russia signed off on a huge gas deal worth as much as $400 billion Wednesday that heralds a pivot east for Russian business amid ongoing tensions with the West over Ukraine, though few details of the deal were made public.
The 30-year gas-export contract, seen as a move by Russian President Vladimir Putin to aggressively shift the country's commercial interests east amid mounting sanctions from the United States and Europe, was signed as the Russian leader has enjoyed a warm welcome in China, where the two countries have inked a raft of agreements during his ongoing, two-day visit."
June 2014
Russia considers yuan, ruble for Chinese gas deals; Government Had Considered Using the U.S. Dollar, UPI, June 26
"The head of the accounting department at Russian energy company Gazprom says there's no risk in using either Chinese or Russian currencies for gas transactions.
'In regard to using the yuan or rubles in accounting, we are basically ready for that, we think that this is completely normal,' Gazprom finance chief Andrei Kruglov said. 'There are no risks for Gazprom, except for minor transaction expenses.'"
China to Set Yuan Clearing Bank in Sydney, Australia, Channel News Asia, June 26

"China will designate a clearing bank in Sydney for overseas trading of its yuan currency, a top Australian official said on Thursday as Beijing seeks to make the tightly-controlled unit more international.
Chinese President Xi Jinping is due to visit Australia in November for a summit of the G20 group of nations, and Hockey said the two countries hope to reach a free trade agreement before the end of the year."
China signs yuan accords with France, Luxembourg, The Bull.Asia, June 30

"China's central bank said it has signed agreements for yuan clearing arrangements with France and Luxembourg, with the aim of promoting greater use of its currency overseas....
Yuan clearing in France and Luxembourg would allow companies and financial institutions to use the currency for cross-border transactions, as well as promote liberalization of trade and investment, PBoC said.

European countries are competing to become the dominant hub for yuan business in the continent."
July 2014

"South Korea and China have agreed to create a market for direct trading of the yuan and won, which is hoped, will help reduce the pressure of the US dollar, as well as cut foreign exchange costs and boost bilateral investment.
The memorandum of understanding (MOU) between China's central bank and the Bank of Korea to create a yuan clearing system was signed during Chinese President Xi Jinping's visit to South Korea on Thursday. The leaders of both countries pledged to sign an agreement by the end of the year... The establishment of a won-yuan market may make bilateral trade easier, and reduce the pressure of the US dollar on the Korean currency.
China also provided South Korea with a $12.8 billion quota to invest in national capital markets, the same amount the UK and France have been granted."
China Signs Currency Deals, Except in the U.S., Wall Street Journal, July 10
"In recent years, China has signed a flurry of currency deals with countries around the world. One notable absence: the U.S.
The Chinese government has been pushing for a greater role for the tightly controlled yuan in global trade, investment and finance, as part of its effort to revamp the country's creaky financial system and to one day challenge the U.S. dollar's dominance in the international monetary system. To promote the yuan on the world stage, Beijing has been trying to foster yuan-trading hubs outside the mainland by making it easier for foreign banks to obtain the yuan as well as to clear yuan-denominated transactions.
Posted by Unknown at 9:49 AM