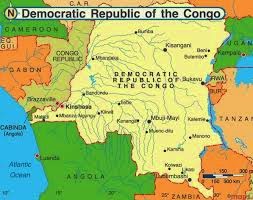 Growth in copper production in Democratic Republic of Congo will slow in 2014 from its rapid pace the previous year due to insufficient energy supply and uncertainty over new mining laws, Congo's mining chamber said.
Copper production leapt to a record 914,631 tonnes last year from 620,000 tonnes in 2012 as new mining projects and expansion plans came online.
In a report on the first quarter of this year, the mining chamber predicted that copper output in 2014 would inch up to 922,000 tonnes, annual growth of just 0.82 percent compared with the 47 percent leap the year before.
"(Congo) still has the potential to produce over a million tonnes in 2014 and even more in following years, if it controls the parameters that influence investment, notably electricity supply and the revision of the mining code," the report said.
The mining sector helped drive economic growth of 8.5 percent in Congo in 2013, which is forecast to rise further to 8.7 percent this year.
Congo possesses enormous reserves of gold , diamonds, copper, cobalt and tin , but the majority of its 65 million people live in poverty due to corruption, mismanagement and war.
International mining operations are drawn to Congo's copper-rich Katanga province, but they have been hamstrung by a lack of reliable energy from dilapidated power sources and energy grids. Congo's national energy company (SNEL) lacks the finances to overhaul its equipment.
"Demand (for electricity) has exceeded what can be delivered by SNEL since 2009, and with the exception of 2011, the gap has only grown, which is more than worrying," the report said.
In a January letter, Prime Minister Augustin Matata Ponyo asked mining companies in Katanga to suspend expansion plans and respect energy rationing imposed by the government, in an effort to cope with the power deficit.
Companies have united, meanwhile, to oppose proposed changes to the mining code. Mining representatives are negotiating with the government over the proposed changes.
The government is seeking to increase royalties on mined material and to reduce stability clauses, a plan that the mining chamber has said will reduce foreign investment in the sector in the long term.
The report also highlighted an expected surge in industrial gold production from 6,149 kg in 2013 to 18,872 kg in 2014.
"The spectacular increase in industrial gold production is due to several projects coming online, which were in the construction phase," the report said.
"It would have been difficult to launch these projects ... under a mining code with a heavy fiscal burden and a stability clause reduced to three years."
Posted by Unknown at 10:50 AM