Assets in top exchange-traded gold product up most since 2011

Assets in the world's biggest exchange-traded bullion product made their largest two-day gain since 2011 on Wednesday, with violence in Iraq and Ukraine buttressing demand.
Holdings in the SPDR Gold Trust increased 1.4% to 796.39 tonnes in the two sessions through Tuesday, Bloomberg reported, adding that it is the biggest two-day gain since November 2011.
Demand for the precious metal is especially strong in Asia, the most active bullion-buying region, with China and India accounting for the majority of the demand. 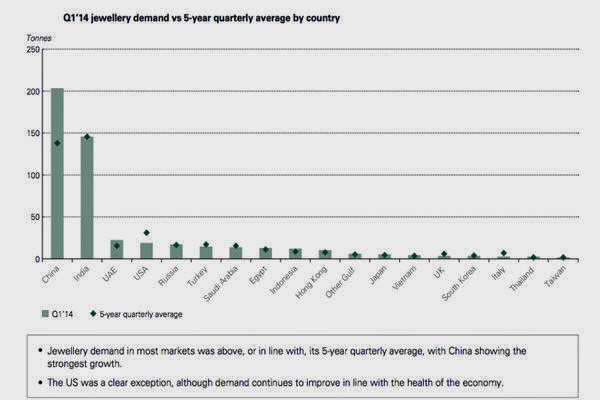 According to The Wall Street Journal, demand rose to a record 1,100 tonnes in China last year and was estimated at 975 tons in India.
“Market fundamentals in Asia remains intact and is getting stronger,” the newspaper quoted Albert Cheng, managing director for the Far East at the World Gold Council, as saying.
Gold futures for August delivery traded Wednesday morning at $1,329.80 per ounce on the Comex division of the New York Mercantile Exchange, up from the previous close of $1,326.60.
Gold has benefited from not only geopolitical tensions but also the US central bank saying that interest rates will remain low for the foreseeable future, sparking worries about inflation.
During times of political or financial turmoil, market participants tend to buy gold, which is seen as a safe-haven investment.
Posted by Unknown at 8:31 AM